skip to main | skip to sidebar

In and around all the things that have to get done, I am delighted to say the website is almost live. I hope that it becomes a vehicle not for only selling the book, but steering people to this blog in order to begin discussions of what the book is about. I know what I think the book is about, I want to hear what others are thinking too.
Posted by Jake Packard at 8:42 AM No comments:

Begin at the Beginning 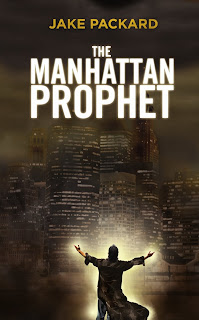 Welcome everyone. This blog is going to be a place for me to keep readers in the loop about all things regarding the release of my new novel, THE MANHATTAN PROPHET. I'll also talk about the publishing process, make updates about my website, and alert you all to any news and events that surround the book. Please feel free to email me at jake@themanhattanprophet.com with questions or comments!

About the book:
takes place in an imminently apocalyptic New York City, where most civil order and government has been destroyed in the limited nuclear war that erupted out of the ongoing conflict between the West and Radical Islam. Now, the multinational corporations, new-founded city state governments, and street gangs vie for power and survival. The masses are forced into a feudalistic existence; many are quarantined on public land, infected with viruses that mutated in the radioactive fallout. Those with “clean” blood rise to prominence while those diseased and dying sink into poverty and depravity.

Into this world, hope rises with a Salem Jones, a mysterious young man born in prison, who without leaving his jail cell has begun a global spiritual movement, spreading healing and hope amongst the poor and downtrodden, but anxiety and fear amongst the rich and powerful. On the day Salem is to be released from prison, he disappears into the walled-off ghetto in New York City which was once Central Park, now known as Shantypark. Tensions mount as battle lines are drawn and the New York city-state prepares for an ultimate battle between good and evil, with the whole world watching.

Posted by Jake Packard at 11:57 AM No comments:

Jake Packard
Jake Packard is a Harvard graduate, living in New York. His life and career has always followed his artistic pursuits demonstrating his love for all things creative, from writing music for his rock band, The Walnut Band, to his creative entrepreneurial endeavor as the owner of First Take Productions, a corporate video production company, and now, the publication of his first novel, The Manhattan Prophet